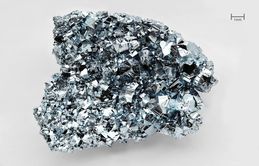 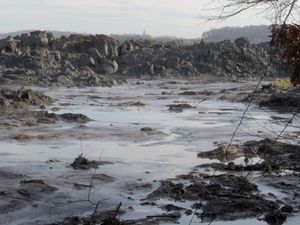 A density of more than 5 g/cm3 is sometimes mentioned as a common heavy metal defining factor[20] and, in the absence of a unanimous definition, is used to populate this list and (unless otherwise stated) guide the remainder of the article. Metalloids meeting the applicable criteria–arsenic and antimony for example—are sometimes counted as heavy metals, particularly in environmental chemistry,[21] as is the case here. Selenium (density 4.8 g/cm3)[22] is also included in the list. It falls marginally short of the density criterion and is less commonly recognised as a metalloid[19] but has a waterborne chemistry similar in some respects to that of arsenic and antimony.[23] Other metals sometimes classified or treated as "heavy" metals, such as beryllium[24] (density 1.8 gm/cm3),[25] aluminium[24] (2.7 gm/cm3),[26] calcium[27] (1.55 gm/cm3),[28] and barium[27] (3.6 gm/cm3)[29] are here treated as light metals and, in general, are not further considered.

Heavy metals up to the vicinity of iron (in the periodic table) are largely made via stellar nucleosynthesis. In this process, lighter elements from hydrogen to silicon undergo successive fusion reactions inside stars, releasing light and heat and forming heavier elements with higher atomic numbers.[44]

These properties make it relatively easy to distinguish a light metal like sodium from a heavy metal like tungsten, but the differences become less clear at the boundaries. Light structural metals like beryllium, scandium, and titanium have some of the characteristics of heavy metals, such as higher melting points;[n 10] post-transition heavy metals like zinc, cadmium, and lead have some of the characteristics of light metals, such as being relatively soft, and having lower melting points;[n 11] and forming mainly colourless complexes.[70][71][72]

Heavy metals are present in nearly all aspects of modern life. Iron may be the most common as it accounts for 90% of all refined metals. Platinum may be the most ubiquitous given it is said to be found in, or used to produce, 20% of all consumer goods.[73]

Some common uses of heavy metals depend on the general characteristics of metals such as electrical conductivity and reflectivity or the general characteristics of heavy metals such as density, strength, and durability. Other uses depend on the characteristics of the specific element, such as their biological role as nutrients or poisons or some other specific atomic properties. Examples of such atomic properties include: partly filled d- or f- orbitals (in many of the transition, lanthanide, and actinide heavy metals) that enable the formation of coloured compounds;[74] the capacity of most heavy metal ions (such as platinum,[75] cerium[76] or bismuth[77]) to exist in different oxidation states and therefore act as catalysts;[78] poorly overlapping 3d or 4f orbitals (in iron, cobalt, and nickel, or the lanthanide heavy metals from europium through thulium) that give rise to magnetic effects;[79] and high atomic numbers and electron densities that underpin their nuclear science applications.[80] Typical uses of heavy metals can be broadly grouped into the following six categories.[81][n 12]

In a cello (example shown above) or a viola the C-string sometimes incorporates tungsten; its high density permits a smaller diameter string and improves responsiveness.[82]

Some uses of heavy metals, including in sport, mechanical engineering, military ordnance, and nuclear science, take advantage of their relatively high densities. In underwater diving, lead is used as a ballast;[83] in handicap horse racing each horse must carry a specified lead weight, based on factors including past performance, so as to equalize the chances of the various competitors.[84] In golf, tungsten, brass, or copper inserts in fairway clubs and irons lower the centre of gravity of the club making it easier to get the ball into the air;[85] and golf balls with tungsten cores are claimed to have better flight characteristics.[86] In fly fishing, sinking fly lines have a PVC coating embedded with tungsten powder, so that they sink at the required rate.[87] In track and field sport, steel balls used in the hammer throw and shot put events are filled with lead in order to attain the minimum weight required under international rules.[88] Tungsten was used in hammer throw balls at least up to 1980; the minimum size of the ball was increased in 1981 to eliminate the need for what was, at that time, an expensive metal (triple the cost of other hammers) not generally available in all countries.[89] Tungsten hammers were so dense that they penetrated too deeply into the turf.[90]

In mechanical engineering, heavy metals are used for ballast in boats,[91] aeroplanes,[92] and motor vehicles;[93] or in balance weights on wheels and crankshafts,[94] gyroscopes, and propellers,[95] and centrifugal clutches,[96] in situations requiring maximum weight in minimum space (for example in watch movements).[92]

The higher the projectile density, the more effectively it can penetrate heavy armor plate ... Os, Ir, Pt, and Re ... are expensive ... U offers an appealing combination of high density, reasonable cost and high fracture toughness.

In military ordnance, tungsten or uranium is used in armour plating[97] and armour piercing projectiles,[98] as well as in nuclear weapons to increase efficiency (by reflecting neutrons and momentarily delaying the expansion of reacting materials).[99] In the 1970s, tantalum was found to be more effective than copper in shaped charge and explosively formed anti-armour weapons on account of its higher density, allowing greater force concentration, and better deformability.[100] Less-toxic heavy metals, such as copper, tin, tungsten, and bismuth, and probably manganese (as well as boron, a metalloid), have replaced lead and antimony in the green bullets used by some armies and in some recreational shooting munitions.[101] Doubts have been raised about the safety (or green credentials) of tungsten.[102]

Because denser materials absorb more radioactive emissions than lighter ones, heavy metals are useful for radiation shielding and to focus radiation beams in linear accelerators and radiotherapy applications.[103]

The strength or durability of heavy metals such as chromium, iron, nickel, copper, zinc, molybdenum, tin, tungsten, and lead, as well as their alloys, makes them useful for the manufacture of artefacts such as tools, machinery,[106] appliances,[107] utensils,[108] pipes,[107] railroad tracks,[109] buildings[110] and bridges,[111] automobiles,[107] locks,[112] furniture,[113] ships,[91] planes,[114] coinage[115] and jewellery.[116] They are also used as alloying additives for enhancing the properties of other metals.[n 14] Of the two dozen elements that have been used in the world's monetised coinage only two, carbon and aluminium, are not heavy metals.[118][n 15] Gold, silver, and platinum are used in jewellery[n 16] as are (for example) nickel, copper, indium, and cobalt in coloured gold.[121] Low-cost jewellery and children's toys may be made, to a significant degree, of heavy metals such as chromium, nickel, cadmium, or lead.[122]

Copper, zinc, tin, and lead are mechanically weaker metals but have useful corrosion prevention properties. While each of them will react with air, the resulting patinas of either various copper salts,[123] zinc carbonate, tin oxide, or a mixture of lead oxide, carbonate, and sulfate, confer valuable protective properties.[124] Copper and lead are therefore used, for example, as roofing materials;[125][n 17] zinc acts as an anti-corrosion agent in galvanised steel;[126] and tin serves a similar purpose on steel cans.[127]

The workability and corrosion resistance of iron and chromium are increased by adding gadolinium; the creep resistance of nickel is improved with the addition of thorium. Tellurium is added to copper and steel alloys to improve their machinability; and to lead to make it harder and more acid-resistant.[128]

Cerium(IV) oxide (sample shown above) is used as a catalyst in self-cleaning ovens.[129]

The biocidal effects of some heavy metals have been known since antiquity.[130] Platinum, osmium, copper, ruthenium, and other heavy metals, including arsenic, are used in anti-cancer treatments, or have shown potential.[131] Antimony (anti-protozoal), bismuth (anti-ulcer), gold (anti-arthritic), and iron (anti-malarial) are also important in medicine.[132] Copper, zinc, silver, gold, or mercury are used in antiseptic formulations;[133] small amounts of some heavy metals are used to control algal growth in, for example, cooling towers.[134] Depending on their intended use as fertilisers or biocides, agrochemicals may contain heavy metals such as chromium, cobalt, nickel, copper, zinc, arsenic, cadmium, mercury, or lead.[135]

The colours of glass, ceramic glazes, paints, pigments, and plastics are commonly produced by the inclusion of heavy metals (or their compounds) such as chromium, manganese, cobalt, copper, zinc, selenium, zirconium, molybdenum, silver, tin, praseodymium, neodymium, erbium, tungsten, iridium, gold, lead, or uranium.[139] Tattoo inks may contain heavy metals, such as chromium, cobalt, nickel, and copper.[140] The high reflectivity of some heavy metals is important in the construction of mirrors, including precision astronomical instruments. Headlight reflectors rely on the excellent reflectivity of a thin film of rhodium.[141]

Heavy metals or their compounds can be found in electronic components, electrodes, and wiring and solar panels where they may be used as either conductors, semiconductors, or insulators. Molybdenum powder is used in circuit board inks.[142] Ruthenium(IV) oxide coated titanium anodes are used for the industrial production of chlorine.[143] Home electrical systems, for the most part, are wired with copper wire for its good conducting properties.[144] Silver and gold are used in electrical and electronic devices, particularly in contact switches, as a result of their high electrical conductivity and capacity to resist or minimise the formation of impurities on their surfaces.[145] The semiconductors cadmium telluride and gallium arsenide are used to make solar panels. Hafnium oxide, an insulator, is used as a voltage controller in microchips; tantalum oxide, another insulator, is used in capacitors in mobile phones.[146] Heavy metals have been used in batteries for over 200 years, at least since Volta invented his copper and silver voltaic pile in 1800.[147] Promethium, lanthanum, and mercury are further examples found in, respectively, atomic, nickel-metal hydride, and button cell batteries.[148]

An X-ray tube with a rotating anode, typically a tungsten-rhenium alloy on a molybdenum core, backed with graphite[152][n 18]

Niche uses of heavy metals with high atomic numbers occur in diagnostic imaging, electron microscopy, and nuclear science. In diagnostic imaging, heavy metals such as cobalt or tungsten make up the anode materials found in x-ray tubes.[155] In electron microscopy, heavy metals such as lead, gold, palladium, platinum, or uranium are used to make conductive coatings and to introduce electron density into biological specimens by staining, negative staining, or vacuum deposition.[156] In nuclear science, nuclei of heavy metals such as chromium, iron, or zinc are sometimes fired at other heavy metal targets to produce superheavy elements;[157] heavy metals are also employed as spallation targets for the production of neutrons[158] or radioisotopes such as astatine (using lead, bismuth, thorium, or uranium in the latter case).[159]

Tetraethyl lead (CH3CH2)4Pb is probably the most significant heavy metal contaminant in recent use.[160]

Potassium chromate, a carcinogen, is used in the dyeing of fabrics, and as a tanning agent to produce leather.

A metal EDTA anion. Pb displaces Ca in Na2[CaEDTA] to give Na2[PbEDTA], which is passed out of the body in urine.[166]