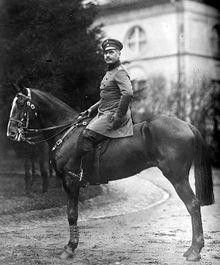 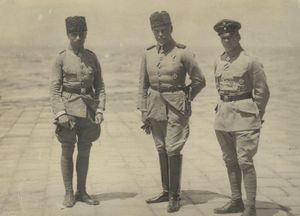 Liman von Sanders was born in Stolp (now Słupsk) in the پومرانيا province of the مملكة پروسيا. Like many other Prussians from aristocratic families, he joined the military and rose through the ranks to Lieutenant General. وفي 1913، مثل العديد من الجنرالات الپروسيين قبله (مثل مولتكه و گولتس)، عـُيـِّن ليرأس البعثة العسكرية الألمانية إلى الدولة العثمانية. For nearly eighty years, the Ottomans had been trying to modernize their army along European lines. Liman von Sanders would be the last German to attempt this task.

On 30 July 1914, two days after the outbreak of the war in Europe, the Ottoman leaders agreed to form an alliance with Germany against Russia, although it did not require them to undertake military action, and on 31 October 1914, the Ottoman Empire officially entered the war on the side of the Central Powers. Britain and France declared war on it on 5 November, and the Ottomans declared a جهاد لاحقاً في ذلك الشهر.

The first proposal to attack the Ottoman Empire was made in November 1914 by the French Minister of Justice Aristide Briand and was rejected. Later that month Winston Churchill, First Lord of the Admiralty, proposed a naval attack on the Dardanelles, based in part on erroneous reports of Ottoman troop strength. An initial attempt to force the Dardanelles by sea failed on 18 March 1915, due to gunfire from Ottoman forts on both sides of the strait. The Allies then turned to planning amphibious operations to capture the forts and clear the strait, which led to the Battle of Gallipoli.

Liman had little time to organize the defences, but he had two things in his favor. First, the Ottoman 5th Army in the Gallipoli peninsula was the best army they had, some 84,000 well-equipped soldiers in six divisions. Second, he was helped by poor Allied leadership. On 23 April 1915, the British landed a major force at Cape Helles. His decision to pull back the strong line of coastal defenses the local Turkish commanders had established and group them inland in preparation for the Allied attack almost gave an early victory to Allies. He was also convinced that Allied landings would take place at Saros Bay and did not believe for a long time the landings at Arıburnu was the main assault, not a ruse. He did not release the main troops in the critical first day of the landings.[1] One of Liman's best decisions during this time was to promote Mustafa Kemal (later known as أتاتورك) to command the 19th division. Kemal's division literally saved the day for the Ottomans. His troops marched up on the day of the landings and occupied the ridge line above the ANZAC landing site, just as the ANZAC troops were moving up the slope themselves. Kemal recognized the danger and personally made sure his troops held the ridge line. They were never forced off despite constant attacks for the next five months.

From April to November 1915 (when the decision to evacuate was made), Liman had to fight off numerous attacks against his defensive positions. The British tried another landing at Suvla Bay, but this also was halted by the Ottoman defenders. The only bright spot for the British in this entire operation was that they managed to evacuate their positions without much loss. However, this battle was a major victory for the Ottoman army and some of the credit is given to the generalship of Liman von Sanders.

وفي مطلع 1915، the previous head of the German military mission to the Ottoman Empire, البارون فون در گولتس, arrived in Istanbul as military advisor to the (essentially powerless) السلطان، محمد الخامس. The old Baron did not get along with Liman von Sanders and did not like the three Pashas (أنور پاشا، جمال پاشا وطلعت پاشا) who ran the Ottoman Empire during the war. The Baron proposed some major offensives against the British, but these proposals came to nothing in the face of Allied offensives against the Ottomans on three fronts (the Dardanelles, the Caucasus Front, and the newly opened Mesopotamian Front). Liman was rid of the old Baron when Enver Pasha sent him to fight the British in Mesopotamia in October 1915. (Goltz died there six months later, just before the British army at الكوت surrendered.)

In 1918, the last year of the war, Liman von Sanders took over command of the Ottoman army during the Sinai and Palestine Campaign, replacing the German General Erich von Falkenhayn who had been defeated by British General Allenby at the end of 1917.

Liman was hampered by the significant decline in power of the Ottoman army. His forces were unable to do anything more than occupy defensive positions and wait for the British attack. The attack was a long time in coming, but when General Allenby finally unleashed his army, the entire Ottoman army was destroyed in a week of fighting (see the Battle of Megiddo). In the rout, Liman was nearly taken prisoner by British soldiers.

After the war ended he was arrested in Malta in February 1919 on charges of having committed war crimes, but he was released six months later. He retired from the German army that year.

In 1927 he published a book he had written in captivity in Malta about his experiences before and during the war (there is an English translation[2]). Two years later, Otto Liman von Sanders died in Munich at the age of seventy-four.[3]