A dictionary is a collection of words in a specific language, often listed alphabetically, with definitions, etymologies, phonetics, pronunciations, and other information;[1] or a book of words in one language with their equivalents in another, also known as a lexicon.[1] According to Nielsen 2008 a dictionary may be regarded as a lexicographical product that is characterised by three significant features: (1) it has been prepared for one or more functions; (2) it contains data that have been selected for the purpose of fulfilling those functions; and (3) its lexicographic structures link and establish relationships between the data so that they can meet the needs of users and fulfil the functions of the dictionary.

In many languages, words can appear in many different forms, but only the undeclined or unconjugated form appears as the headword in most dictionaries. Dictionaries are most commonly found in the form of a book, but some newer dictionaries, like StarDict and the New Oxford American Dictionary are dictionary software running on PDAs or computers. There are also many online dictionaries accessible via the Internet. 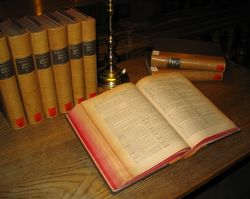 The earliest modern European dictionaries were bilingual dictionaries. The earliest in the اللغة الإنگليزية were glossaries of French, Italian or Latin words along with definitions of the foreign words in English. An early non-alphabetical list of 8000 English words was the Elementarie created by Richard Mulcaster in 1592.[5][6]

The first purely English alphabetical dictionary was A Table Alphabeticall, written by English schoolteacher Robert Cawdrey in 1604. The only surviving copy is found at the Bodleian Library in Oxford. Yet this early effort, as well as the many imitators which followed it, was seen as unreliable and nowhere near definitive. Philip Stanhope, 4th Earl of Chesterfield was still lamenting in 1754, 150 years after Cawdrey's publication, that it is "a sort of disgrace to our nation, that hitherto we have had no… standard of our language; our dictionaries at present being more properly what our neighbors the Dutch and the Germans call theirs, word-books, than dictionaries in the superior sense of that title." [7] It was not until Samuel Johnson's A Dictionary of the English Language (1755) that a truly noteworthy, reliable English Dictionary was deemed to have been produced, and the fact that today many people still mistakenly believe Johnson to have written the first English Dictionary is a testament to this legacy.[8] By this stage, dictionaries had evolved to contain textual references for most words, and were arranged alphabetically, rather than by topic (a previously popular form of arrangement, which meant all animals would be grouped together, etc.). Johnson's masterwork could be judged as the first to bring all these elements together, creating the first 'modern' dictionary.[8]

Johnson's Dictionary remained the English-language standard for over 150 years, until the Oxford University Press began writing and releasing the Oxford English Dictionary in short fascicles from 1884 onwards. It took nearly 50 years to finally complete the huge work, and they finally released the complete OED in twelve volumes in 1928. It remains the most comprehensive and trusted English language dictionary to this day, with revisions and updates added by a dedicated team every three months. One of the main contributors to this modern day dictionary was an ex-army surgeon, William Chester Minor, a convicted murderer who was confined to an asylum for the criminally insane.[9]

Another variant is the glossary, an alphabetical list of defined terms in a specialised field, such as medicine or science. The simplest dictionary, a defining dictionary, provides a core glossary of the simplest meanings of the simplest concepts. From these, other concepts can be explained and defined, in particular for those who are first learning a language. In English, the commercial defining dictionaries typically include only one or two meanings of under 2000 words. With these, the rest of English, and even the 4000 most common English idioms and metaphors, can be defined.

Dictionaries for languages for which the pronunciation of words is not apparent from their spelling, such as the English language, usually provide the pronunciation, often using the International Phonetic Alphabet. For example, the definition for the word dictionary might be followed by the (American English) phonemic spelling: /ˈdɪkʃəˌnɛri/. American dictionaries, however, often use their own pronunciation spelling systems, for example dictionary [dĭkʹshə-nârʹē] while the IPA is more commonly used within the British Commonwealth countries. Yet others use an ad hoc notation; for example, dictionary may become [DIK-shuh-nair-ee]. Some on-line or electronic dictionaries provide recordings of words being spoken.

Lexicographers apply two basic philosophies to the defining of words: prescriptive or descriptive. Noah Webster, intent on forging a distinct identity for the American language, altered spellings and accentuated differences in meaning and pronunciation of some words. This is why American English now uses the spelling color while the rest of the English-speaking world prefers colour. (Similarly, British English subsequently underwent a few spelling changes that did not affect American English; see further at American and British English spelling differences.) Large 20th-century dictionaries such as the Oxford English Dictionary (OED) and Webster's Third are descriptive, and attempt to describe the actual use of words.

While descriptivists argue that prescriptivism is an unnatural attempt to dictate usage or curtail change, prescriptivists argue that to indiscriminately document "improper" or "inferior" usages sanctions those usages by default and causes language to "deteriorate". Although the debate can become very heated, only a small number of controversial words are usually affected. But the softening of usage notations, from the previous edition, for two words, ain't and irregardless, out of over 450,000 in Webster's Third in 1961, was enough to provoke outrage among many with prescriptivist leanings, who branded the dictionary as "permissive."

The prescriptive/descriptive issue has been given so much consideration in modern times that most dictionaries of English apply the descriptive method to definitions, while additionally informing readers of attitudes which may influence their choices on words often considered vulgar, offensive, erroneous, or easily confused. Merriam-Webster is subtle, only adding italicized notations such as, sometimes offensive or nonstand (nonstandard.) American Heritage goes further, discussing issues separately in numerous "usage notes." Encarta provides similar notes, but is more prescriptive, offering warnings and admonitions against the use of certain words considered by many to be offensive or illiterate, such as, "an offensive term for..." or "a taboo term meaning..."

Because of the broad use of dictionaries, and their acceptance by many as language authorities, their treatment of the language does affect usage to some degree, even the most descriptive dictionaries providing conservative continuity. In the long run, however, usage primarily determines the meanings of words in English, and the language is being changed and created every day. As Jorge Luis Borges says in the prologue to "El otro, el mismo": "It is often forgotten that (dictionaries) are artificial repositories, put together well after the languages they define. The roots of language are irrational and of a magical nature."

Science Dictionaries have existed from the 6th century BCE when the Chinese started organizing all of their scientifically important knowledge, and combining them into scrolls. The amount and type of information ranged from theories, species, experiments, essays, research, and various other forms of knowledge. However it wasn't until the first century BCE when they started organizing each and every scroll to form a dictionary of scientific knowledge. The dictionaries were ordered from "most important" to "least important" by Chinese standards, and reached up to 8,000 entries long. Some versions have been found where the dragon (one of the most ancient and powerful creatures of Chinese legend) was the first entry[10] in the science dictionaries. However, that since the notion of searching up entries one by one based on importance, was too much of a confusion (also because, the Chinese scientists couldn't agree upon a good definition for each article) they abandoned the task, and it had never gained momentum to be a worldwide success.

For languages other than modern English, see the article about that language. See also articles such as Japanese dictionaries.