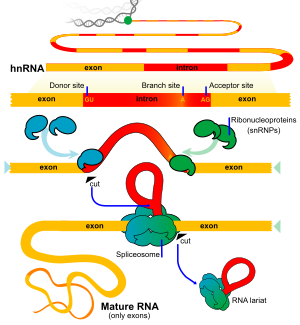 Introns are removed and exons joined together in the process of RNA splicing.

Exons in a messenger RNA precursor (pre-mRNA). Exons can include both sequences that code for amino acids (red) and untranslated sequences (grey). Introns — those parts of the pre-mRNA that are not in the mRNA — (blue) are removed, and the exons are joined together (spliced) to form the final functional mRNA. The 5′ and 3′ ends of the mRNA are marked to differentiate the two untranslated regions (grey).