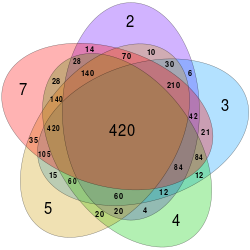 A Venn diagram showing the least common multiples of combinations of 2, 3, 4, 5 and 7 (6 is skipped as it is 2 × 3, both of which are already represented).
For example, a card game which requires its cards to be divided equally among up to 5 players requires at least 60 cards, the number at the intersection of the 2, 3, 4, and 5 sets, but not the 7 set.

The lcm is the "lowest common denominator" (lcd) that can be used before fractions can be added, subtracted or compared.

Common multiples of 4 and 6 are the numbers that are in both lists:

In this list, the smallest number is 12. Hence, the least common multiple is 12.

When adding, subtracting, or comparing simple fractions, the least common multiple of the denominators (often called the lowest common denominator) is used, because each of the fractions can be expressed as a fraction with this denominator. For example,

where the denominator 42 was used, because it is the least common multiple of 21 and 6.

Suppose there are two meshing gears in a machine, having m and n teeth, respectively, and the gears are marked by a line segment drawn from the center of the first gear to the center of the second gear. When the gears begin rotating, the number of rotations the first gear must complete to realign the line segment can be calculated by using  . The first gear must complete   rotations for the realignment. By that time, the second gear will have made   rotations.

Suppose there are three planets revolving around a star which take l, m and n units of time, respectively, to complete their orbits. Assume that l, m and n are integers. Assuming the planets started moving around the star after an initial linear alignment, all the planets attain a linear alignment again after   units of time. At this time, the first, second and third planet will have completed  ,   and   orbits, respectively, around the star.[5]

To avoid introducing integers that are larger than the result, it is convenient to use the equivalent formulas

where the result of the division is always an integer.

These formulas are also valid when exactly one of a and b is 0, since gcd(a, 0) =

To return to the example above,

There are fast algorithms, such as the Euclidean algorithm for computing the gcd that do not require the numbers to be factored. For very large integers, there are even faster algorithms for the three involved operations (multiplication, gcd,and division); see Fast multiplication. As these algorithms are more efficient with factors of similar size, it is more efficient to divide the largest argument of the lcm by the gcd of the arguments, as in the example above.

The unique factorization theorem indicates that every positive integer greater than 1 can be written in only one way as a product of prime numbers. The prime numbers can be considered as the atomic elements which, when combined, make up a composite number.

This fact can be used to find the lcm of a set of numbers.

Factor each number and express it as a product of prime number powers.

This method is not as efficient as reducing to the greatest common divisor, since there is no known general efficient algorithm for integer factorization.

The same method can also be illustrated with a Venn diagram as follows, with the prime factorization of each of the two numbers demonstrated in each circle and all factors they share in common in the intersection. The lcm then can be found by multiplying all of the prime numbers in the diagram.

Here is an example:

This also works for the greatest common divisor (gcd), except that instead of multiplying all of the numbers in the Venn diagram, one multiplies only the prime factors that are in the intersection. Thus the gcd of 48 and 180 is 2 × 2 × 3 = 12.

This method works easily for finding the lcm of several integers.[بحاجة لمصدر]

In other words, the least element is increased by the corresponding x whereas the rest of the elements pass from X(m) to X(m+1) unchanged.

The algorithm stops when all elements in sequence X(m) are equal. Their common value L is exactly lcm(X).

This method works for any number of numbers. One begins by listing all of the numbers vertically in a table (in this example 4, 7, 12, 21, and 42):

The process begins by dividing all of the numbers by 2. If 2 divides any of them evenly, write 2 in a new column at the top of the table, and the result of division by 2 of each number in the space to the right in this new column. If a number is not evenly divisible, just rewrite the number again. If 2 does not divide evenly into any of the numbers, repeat this procedure with the next largest prime number, 3 (see below).

Now, assuming that 2 did divide at least one number (as in this example), check if 2 divides again:

As a general computational algorithm, the above is quite inefficient. One would never want to implement it in software: it takes too many steps and requires too much storage space. A far more efficient numerical algorithm can be obtained by using Euclid's algorithm to compute the gcd first, and then obtaining the lcm by division.

According to the fundamental theorem of arithmetic, every integer greater than 1 can be represented uniquely as a product of prime numbers, up to the order of the factors:

Given two positive integers   and  , their least common multiple and greatest common divisor are given by the formulas

In fact, every rational number can be written uniquely as the product of primes, if negative exponents are allowed. When this is done, the above formulas remain valid. For example:

The positive integers may be partially ordered by divisibility: if a divides b (that is, if b is an integer multiple of a) write a ≤ b (or equivalently, b ≥ a). (Note that the usual magnitude-based definition of ≤ is not used here.)

Under this ordering, the positive integers become a lattice, with meet given by the gcd and join given by the lcm. The proof is straightforward, if a bit tedious; it amounts to checking that lcm and gcd satisfy the axioms for meet and join. Putting the lcm and gcd into this more general context establishes a duality between them:

If a formula involving integer variables, gcd, lcm, ≤ and ≥ is true, then the formula obtained by switching gcd with lcm and switching ≥ with ≤ is also true. (Remember ≤ is defined as divides).

The following pairs of dual formulas are special cases of general lattice-theoretic identities.

This identity is self-dual:

where the absolute bars || denote the cardinality of a set.