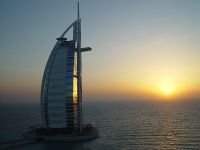 Many hotels can be considered destinations in themselves, by dint of unusual features of the lodging or its immediate environment:

Some hotels are built with living trees as structural elements, for example the Costa Rica Tree House in the Gandoca-Manzanillo Wildlife Refuge, Costa Rica; the Treetops Hotel in Aberdare National Park, Kenya; the Ariau Towers near Manaus, البرازيل, on the Rio Negro in the Amazon; and Bayram's Tree Houses in Olympos, تركيا.

Desert Cave Hotel in Coober Pedy, South Australia and the Cuevas Pedro Antonio de Alarcón (named after the author) in Guadix, Spain, as well as several hotels in Cappadocia, Turkey, are notable for being built into natural cave formations, some with rooms underground.

Capsule hotels are a type of economical hotel that are found in Japan, where people sleep in stacks of rectangular containers.

The Ice Hotel in Jukkasjärvi, Sweden, and the Hotel de Glace in Duschenay, Canada, melt every spring and are rebuilt each winter; the Mammut Snow Hotel in Finland is located within the walls of the Kemi snow castle; and the Lainio Snow Hotel is part of a snow village near Ylläs, Finland.

Garden hotels, famous for their gardens before they became hotels, include Gravetye Manor, the home of garden designer William Robinson, and Cliveden, designed by Charles Barry with a rose garden by Geoffrey Jellicoe.

Some hotels have accommodation underwater, such as Utter Inn in بحيرة ملارن، السويد. هيدروپوليس, project cancelled 2004 in Dubai, will have suites on the bottom of the Persian Gulf, and Jules Undersea Lodge in Key Largo, فلوريدا requires scuba diving to access its rooms.

Some hotels are built specifically to create a captive trade, example at casinos and holiday resorts. Though of course hotels have always been built in popular desinations, the defining characteristic of a resort hotel is that it exists purely to serve another attraction, the two having the same owners.

In Las Vegas there is a tradition of one-upmanship with luxurious and extravagant hotels in a concentrated area known as the Las Vegas Strip. This trend now has extended to other resorts worldwide, but the concentration in Las Vegas is still the world's highest: nineteen of the world's twenty-five largest hotels by room count are on the Strip, with a total of over 67,000 rooms.[1]

Frequently, expanding railway companies built grand hotels at their termini, such as the Midland Hotel, Manchester next to the former Manchester Central Station and in London the ones above St Pancras railway station and Charing Cross railway station also in London is the Chiltern Court Hotel above Baker Street tube station and Canada's grand railway hotels. They are or were mostly, but not exclusively, used by those travelling by rail.

A motel (Motor Hotel) is a hotel which is for a short stay, usually for a night, for motorists on long journeys. It has direct access from the room to the vehicle (for example a central parking lot around which the buildings are set), and is built conveniently close to major roads and intersections.

In 2006, Guinness World Records listed the First World Hotel in Genting Highlands, Malaysia as the world's largest hotel with a total of 6,118 rooms.[2]

According to the Guinness Book of World Records, the oldest hotel still in operation is the Hoshi Ryokan, in the Awazu Onsen area of Komatsu, Japan which opened in 717.[3]

Burj Al Arab in United Arab Emirates is the tallest building used exclusively as a hotel.[4] However, the Rose Tower, also in Dubai, which has already topped Burj Al Arab's height at 333 م (1,093 قدم), will take away this title upon its opening.[5][6][7]

Some hotels sell individual rooms to investors. The buyer is allowed to stay in the room without charge or at a reduced rate for a given number of days each year. The investor is paid a share of the takings for the room. Rooms can be sold on a leasehold basis, sometimes on a 999 year lease. Room owners are free to sell at any time.[8]

A number of public figures have notably chosen to take up semi-permanent or permanent residence in hotels.