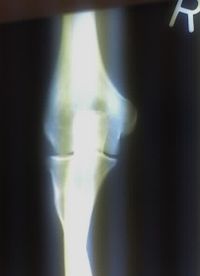 المقالة الرئيسية: Projectional Radiography
Acquisition of projectional radiography, with an X-ray generator and a detector.

DEXA, or bone densitometry, is used primarily for osteoporosis tests. It is not projection radiography, as the X-rays are emitted in 2 narrow beams that are scanned across the patient, 90 degrees from each other. Usually the hip (head of the femur), lower back (lumbar spine), or heel (calcaneum) are imaged, and the bone density (amount of calcium) is determined and given a number (a T-score). It is not used for bone imaging, as the image quality is not good enough to make an accurate diagnostic image for fractures, inflammation, etc. It can also be used to measure total body fat, though this is not common. The radiation dose received from DEXA scans is very low, much lower than projection radiography examinations.

Fluoroscopy is a term invented by Thomas Edison during his early X-ray studies. The name refers to the fluorescence he saw while looking at a glowing plate bombarded with X-rays.[1]

Lead is the most common shield against X-rays because of its high density (11340 kg/m3), stopping power, ease of installation and low cost. The maximum range of a high-energy photon such as an X-ray in matter is infinite; at every point in the matter traversed by the photon, there is a probability of interaction. Thus there is a very small probability of no interaction over very large distances. The shielding of photon beam is therefore exponential (with an attenuation length being close to the radiation length of the material); doubling the thickness of shielding will square the shielding effect.

The following table shows the recommended thickness of lead shielding in function of X-ray energy, from the Recommendations by the Second International Congress of Radiology.[2]

In medicine and dentistry, projectional radiography and computed tomography images generally use X-rays created by X-ray generators, which generate X-rays from X-ray tubes. The resultant images from the radiograph (X-ray generator/machine) or CT scanner are correctly referred to as "radiograms"/"roentgenograms" and "tomograms" respectively.

Dual-energy radiography is where images are acquired using two separate tube voltages. This is the standard method for bone densitometry. It is also used in CT pulmonary angiography to decrease the required dose of iodinated contrast.[3]

Radiography's origins and fluoroscopy's origins can both be traced to 8 November 1895, when German physics professor Wilhelm Conrad Röntgen discovered the X-ray and noted that, while it could pass through human tissue, it could not pass through bone or metal.[4] Röntgen referred to the radiation as "X", to indicate that it was an unknown type of radiation. He received the first Nobel Prize in Physics for his discovery.[5]

There are conflicting accounts of his discovery because Röntgen had his lab notes burned after his death, but this is a likely reconstruction by his biographers:[6][7] Röntgen was investigating cathode rays using a fluorescent screen painted with barium platinocyanide and a Crookes tube which he had wrapped in black cardboard to shield its fluorescent glow. He noticed a faint green glow from the screen, about 1 metre away. Röntgen realized some invisible rays coming from the tube were passing through the cardboard to make the screen glow: they were passing through an opaque object to affect the film behind it.[8]

The first use of X-rays under clinical conditions was by John Hall-Edwards in Birmingham, England on 11 January 1896, when he radiographed a needle stuck in the hand of an associate. On 14 February 1896, Hall-Edwards also became the first to use X-rays in a surgical operation.[9]

The United States saw its first medical X-ray obtained using a discharge tube of Ivan Pulyui's design. In January 1896, on reading of Röntgen's discovery, Frank Austin of Dartmouth College tested all of the discharge tubes in the physics laboratory and found that only the Pulyui tube produced X-rays. This was a result of Pulyui's inclusion of an oblique "target" of mica, used for holding samples of fluorescent material, within the tube. On 3 February 1896 Gilman Frost, professor of medicine at the college, and his brother Edwin Frost, professor of physics, exposed the wrist of Eddie McCarthy, whom Gilman had treated some weeks earlier for a fracture, to the X-rays and collected the resulting image of the broken bone on gelatin photographic plates obtained from Howard Langill, a local photographer also interested in Röntgen's work.[10]

X-rays were put to diagnostic use very early; for example, Alan Archibald Campbell-Swinton opened a radiographic laboratory in the United Kingdom in 1896, before the dangers of ionizing radiation were discovered. Indeed, Marie Curie pushed for radiography to be used to treat wounded soldiers in World War I. Initially, many kinds of staff conducted radiography in hospitals, including physicists, photographers, physicians, nurses, and engineers. The medical speciality of radiology grew up over many years around the new technology. When new diagnostic tests were developed, it was natural for the Radiographers to be trained in and to adopt this new technology. Radiographers now perform fluoroscopy, computed tomography, mammography, ultrasound, nuclear medicine and magnetic resonance imaging as well. Although a nonspecialist dictionary might define radiography quite narrowly as "taking X-ray images", this has long been only part of the work of "X-ray departments", radiographers, and radiologists. Initially, radiographs were known as roentgenograms,[11] while Skiagrapher (from the Ancient Greek words for "shadow" and "writer") was used until about 1918 to mean Radiographer. The Japanese term for the radiograph, レントゲン (rentogen), shares its etymology with the original English term.