الخلافة العثمانية, under the آل عثمان of the الأمبراطورية العثمانية inherited the responsibility of the الخلافة from the المماليك في مصر. 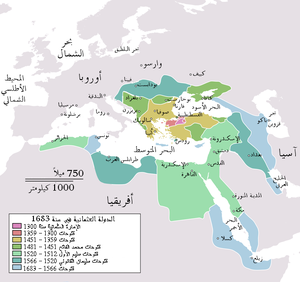 During the period of Ottoman growth, Ottoman rulers beginning with محمد الفاتح claimed the caliphal authority. His grandson سليم الأول, through conquering and unification of Muslim lands, became the defender of the holiest places in الإسلام. The demise of the Ottoman Caliphate took place in part because of a slow erosion of power in relation to Europe and end of the state in consequence of partitioning of the Ottoman Empire. عبد المجيد الثاني, who lost the Sultanate, kept the الخليفة position for a couple years, but with Atatürk's reforms leading to the creation of the modern Turkish state, the caliph position was abolished.

A chief symbol of the Ottoman Caliphate was the "Great Banner of the Caliphs," a large green banner embroidered with texts from the Qur'an and with the name of Allah emblazoned on it 28,000 times in golden letters. It was passed down in the Ottoman dynasty from father to son and only carried into battle if the Sultan himself or his specifically designated representative was there in person.

For the last 400 years of its existence, the Caliphate was claimed by the Turkish Sultans of the الإمبراطورية العثمانية. Though the Ottomans actively used the title only sporadically, from 1517 onwards the Ottoman Sultan came to be viewed as the de facto leader and representative of the Islamic world. From Constantinople (now Istanbul), the Ottomans ruled over an empire that, at its peak, covered Anatolia, most of the Middle East, North Africa, the Caucasus, and extended deep into Eastern Europe.

Strengthened by the Peace of Westphalia, the Reformation, and the الثورة الصناعية, European powers regrouped and challenged Ottoman dominance. Owing largely to poor leadership, archaic political norms, and an inability to keep pace with technological progress in Europe, the Ottoman Empire could not respond effectively to Europe’s resurgence and gradually lost its position as a pre-eminent superpower.

By the late nineteenth century, the Ottoman Empire’s problems had evolved into crises. Territorial losses in conflicts such as the Russo-Turkish Wars substantially reduced Ottoman strength and influence, and years of financial mismanagement came to a head when the Empire defaulted on its loans in 1875. A movement arose to retain the caliphate in Subcontinent Indo-Pak led by Maulana Muhammad Ali Johar and his brother Maulana Shaukat Ali. This movement was a symbol of the allegiance of the Muslims of the subcontinent to their central leadership of Islam. As during the Mughal reign the kingdom is autonomous in its operations but sought the consent of the Caliph in Turkey. The people there had a mindset in which the supreme leadership of Muslims lied in Turkey. This was a mass movement but had not proved to be successful due to lack of resources and the limitations of their British rulers.

Sultan Abdul-Hamid II, who ruled 1876-1909, felt that the Empire’s desperate situation could only be remedied through strong and determined leadership. He distrusted his ministers and other officials that had served his predecessors and gradually reduced their role in his regime, concentrating absolute power over the Empire’s governance in his own hands. Taking a hard-line against Western involvement in Ottoman affairs, he emphasized the Empire’s "Islamic" character, reasserted his status as the Caliph, and called for Muslim unity behind the Caliphate.

Abdul-Hamid strengthened the Empire’s position somewhat and succeeded briefly in reasserting Islamic power, by building numerous schools, reducing the national debt, and embarking on projects aimed at revitalizing the Empire’s decaying infrastructure. His autocratic style of governance created a backlash that led to the end of his reign.

Western-inclined Turkish military officers opposed to Abdul-Hamid’s rule had steadily organized in the form of secret societies within and outside إيطاليا. By 1906, the movement enjoyed the support of a significant portion of the army, and its leaders formed the Committee of Union and Progress (CUP), informally known as the Young Turk Party. The Young Turks sought to remodel administration of the Empire along Western lines. Their ideology was nationalist in character, and was a precursor of the movement that would seize control of Turkey following الحرب العالمية الأولى. Though privately disdainful of Islam and the religious establishment, CUP leaders presented their ideas to the public as a revival of true Islamic principles. Under the leadership of Enver Pasha, a Turkish military officer, the CUP launched a military coup against the Sultan in 1908, proclaiming a new regime on July 6. Though they left Abdul-Hamid on his throne, the Young Turks compelled him to restore the parliament and constitution he had suspended thirty years earlier, thereby creating a constitutional monarchy and stripping the Caliphate of its authority.

A counter-coup launched by soldiers loyal to the Sultan threatened the new government but ultimately failed. After nine months into the new parliamentary term, discontent and reaction found expression in a fundamentalist movement, the counter-revolutionary 31 March Incident, which actually occurred on 13 April 1909. Many aspects of this revolt, which started within certain sections of the mutinying army in Istanbul, are still yet to be analyzed. Its generally admitted perception of a ‘reactionary’ movement has sometimes been challenged, given the results and effects on the young political system.

Abdul-Hamid was deposed on April 13, 1909. He was replaced by his brother Rashid Effendi, who was proclaimed Sultan محمد الخامس on April 27.

In 1911 إيطاليا warred with the Ottomans over Libya, and Turkey’s failure to defend these regions demonstrated the weakness of the Ottoman military. In 1912 Bulgaria, Serbia, Montenegro, and Greece formed the Balkan League, an anti-Turkish alliance that subsequently launched a joint attack on the Ottoman Empire. The ensuing Balkan Wars eliminated what little presence the Ottomans had left in Europe, and only infighting between the Balkan League allies prevented them from advancing into Anatolia.

Internally, the Ottomans continued to be troubled by political instability. Nationalist uprisings that had plagued the Empire sporadically for the past fifty years intensified. The masses were growing frustrated with chronic misgovernance and Turkey’s poor showing in military conflicts. In response, the CUP led a second coup d’etat in 1913 and seized absolute control of the government. For the next five years, the Empire was a one-party state ruled by the CUP under the leadership of Enver Pasha (who returned to Istanbul after having served Turkey abroad in various military and diplomatic capacities since the initial coup), Minister of the Interior Talat Pasha, and Minister of the Navy Cemal Pasha. Though the Sultan was retained, he made no effort to exercise power independent of the Young Turks and was effectively their puppet. The Caliphate was thus held nominally by Mehmed V, but the authority attached to the office rested with the Young Turks.

As الحرب العالمية الأولى broke out in Europe, the Young Turks struck an alliance with ألمانيا, a move that would have disastrous consequences. The Empire entered the war on the side of the Central Powers in November 1914, and Britain, فرنسا, and روسيا immediately declared war on Turkey. As the development of the war, the empire’s position continued to deteriorate, and even in the Middle East—the very heartland of the Islamic world—would soon be lost.

Though the Young Turks had compelled the Sultan in his capacity as the Caliph to declare a global jihad urging all Muslims to resist Allied encroachment on their lands, the effort was largely unsuccessful. The Young Turk government resigned en masse and Enver, Talat, and Cemal fled Turkey aboard a German warship. Sultan Mehmed VI, who was proclaimed Sultan after his brother Mehmed V died of a heart attack in July, agreed to an armistice. The Armistice of Mudros formalizing Ottoman surrender was signed aboard a British warship on October 30, 1918. Allied troops arrived in Istanbul and occupied the Sultan’s palace shortly thereafter. see:Proclamation of the Sherif of Mecca

The Turkish national movement, as the details explained in Turkish War of Independence forms a Turkish Grand National Assembly, secured formal recognition of the nation’s independence and new borders on July 23, 1923 through the Treaty of Lausanne. The National Assembly declared Turkey a republic on October 29 and proclaimed Ankara its new capital. After nearly 700 years, the Ottoman Empire had officially ceased to exist. However, under Allied direction, the Sultan pledged to suppress such movements and secured an official fatwa from the Sheikh ul-Islam declaring them to be un-Islamic. But the nationalists steadily gained momentum and began to enjoy widespread support. Many sensed that the nation was ripe for revolution. In an effort to neutralize this threat, the Sultan agreed to hold elections, with the hope of placating and co-opting the nationalists. To his dismay, nationalist groups swept the polls, prompting him to again dissolve parliament in April 1920.

Initially, the National Assembly seemed willing to allow a place for the Caliphate in the new regime, agreeing to the appointment of Mehmed’s cousin Abdul Mejid II as Caliph upon Mehmed’s departure. But the position had been stripped of any authority, and Abdul Mejid’s purely ceremonial reign would be short lived. Mustafa Kemal had been a vocal critic of the Ottoman House and its Islamic orientation. Now that he controlled Turkey and had the people’s overwhelming support, he could run the nation as he pleased. When Abdul Mejid was declared Caliph, Kemal refused to allow the traditional Ottoman ceremony to take place, bluntly declaring,

The Khalifa has no power or position except as a nominal figurehead.

In response to Abdul Mejid's petition for an increase in his allowance, Kemal wrote,

Your office, the Khalifate, is no more than an historic relic. It has no justification for existence. It is a piece of impertinence that you should dare write to any of my secretaries!

Still, for all the power he had already wielded in Turkey, Kemal did not dare to abolish the Caliphate outright, as it still commanded a considerable degree of support from the common people.

Then an event happened which was to deal a fatal blow to the Caliphate. Two Indian brothers, مولانا محمد علي and مولانا شوكت علي, leaders of the Indian-based Khilafat Movement, distributed pamphlets calling upon the Turkish people to preserve the Ottoman Caliphate for the sake of Islam. Under Turkey's new nationalist government, however, this was construed as foreign intervention, and any form of foreign intervention was labeled an insult to Turkish sovereignty, and worse, a threat to State security. Kemal promptly seized his chance. On his initiative, the National Assembly abolished the Caliphate on March 3, 1924. Abdul Mejid was sent into exile along with the remaining members of the Ottoman House, marking the official end of the "Ottoman Caliphate".